The Bobbies go in two by two…with submachine guns 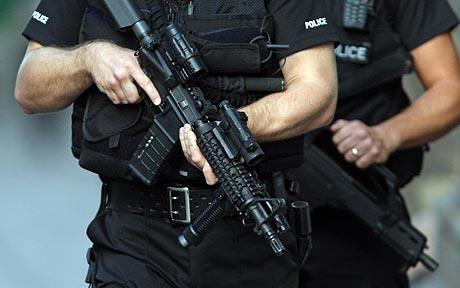 I’m in England for a while because my wife Helen’s older sister is very ill in St Peter’s Hospital in Surrey.

But, thanks to the internet, I can still, with Roger Child’s help (though he’s on holiday at times), keep KIN going.

The first thing that strikes me about dear old England is how similar, culturally, we Kiwis are to these Brits — except for the police with sub- machineguns.

If you’ve got kids who want to do their OE, they’ll be more ‘at home’ here than in the US.

The Brits, you see, are like our cranky, aged parents, living in reduced circumstances on borrowed memories.

We have hope, they have resignation.

My first impressions on this trip is just how pleasant the British are, everything considered.

At the airport, officials were polite and pretty efficient. Contrast this to the loud  bully-boy types one encounters first in Los Angeles. Americans seem to believe in force, loudly and coldly applied to whoever is in their sights.

Somehow the Brits still manage to ‘Keep Calm and Carry On’ and preserve their humanity.

( I realise ordinary Americans are usually the same of course)

However, the Bobbies we saw on Waterloo Station were carrying powerful sub-machine guns and were belted up with large handguns.

They patrolled the crowded concorse, eyes switching around from side to side, as hundreds of commuters and tourists made for their trains.

God knows what would happen if ISIS maniacs opened fire in a place like this.

It would be awful, but at least these cops would keep their cool and their self discipline…we would hope.

More later from the home of our democracy.